George Seurat spent over two years, painting “A Sunday Afternoon on the Island of Grand Jette.”    It is nearly 7 by 10 feet and occupies an entire wall in the Art Institute of Chicago.  The painting depicts a lovely landscape with lakeside visitors, including people in 1896 garb, complete with dogs and even a pet monkey in front of a lady in the foreground.

Standing at the entrance to the hall where the painting is hung, you can feel a part of the lovely, sunny afternoon in Paris.

But stand closer and all you see are yellow, red and blue dots, each carefully positioned to contribute to the painting as a whole.  Seurat believed that this form of painting, called divisionism at the time but now known as pointillism, would make the colors more brilliant and powerful than standard brushstrokes.  His painting teaches us a valuable lesson in perspective.

Sometimes, you have to back away from a situation to get the full picture.

Jesus understood this.  For example, the people were crying “Hosanna” and “Blessed is the King who comes in the name of the Lord” while He was riding on the back of the donkey in what is called “His Triumphal Entry”.

And when he drew near and saw the city, he wept over it, saying, “Would that you, even you, had known on this day the things that make for peace! But now they are hidden from your eyes.

He stood afar and looked at the entire scene unfolding before Him, and recognized that the people were clamoring after that which would do no good and that they were ignoring the relief that He could bring which would do eternal good.

Jesus understood this too.  For example, at other times, He participated in the situation itself, getting close to those involved in the conflict.  In John 8:3-11 we read of the following encounter:

The scribes and the Pharisees brought a woman who had been caught in adultery, and placing her in the midst – they said to him, “Teacher, this woman has been caught in the act of adultery.  Now in the Law Moses commanded us to stone such women. So what do you say?”  This they said to test him, that they might have some charge to bring against him. Jesus bent down and wrote with his finger on the ground.  And as they continued to ask him, he stood up and said to them, “Let him who is without sin among you be the first to throw a stone at her.”  But when they heard it, they went away one by one, beginning with the older ones, and Jesus was left alone with the woman standing before him.   Jesus stood up and said to her, “Woman, where are they? Has no one condemned you?”  She said, “No one, Lord.” And Jesus said, “Neither do I condemn you; go, and from now on sin no more.”

Jesus got into the mix with the scribes and Pharisees.  What He wrote in the sand we don’t know, but it was possible that He was listing the sins of those who were the woman’s accusers.  I can imagine that the accusers were so convicted when they saw that Jesus knew their sins and had listed them in the writing on the ground that they just wanted to get away from the situation.  No longer were they intent on getting this woman for her sin.  Rather, they all left the woman alone and unharmed with Jesus.

Then, when He addressed the woman, He, who could have condemned her because He was without sin, extended grace and mercy by letting her go with the command not to sin any more.

He stood close by the woman and saw the entire situation.   Sometimes what you see depends on where you stand.

A famous Christmas song is entitled “Do you hear what I hear?”.  Here it is as sung on the Nashville A Capella Album Christmas.

May we seek our perspective from Him who provides help far surpassing our own limited abilities.  Seek the Lord and lean on His wisdom rather than your own.  Sometimes, you have to back away from a situation to get the full picture, and sometimes you have to get involved to see the real problem.

This week, we had some beautiful weather and, on one such evening, we were eating dinner on the porch. I gazed over the backyard and noticed that some of the trees in the woods already have the characteristic red hue that precedes the brilliant color of autumn. I pointed out these harbingers to my husband and received the traditional “Ugh!” and I was reminded of our differing perspective.

We each have our own perspective whether it be on monumental topics such as our spiritual life or whether the topic is insignificant such as leaf color.

I see the beautiful pallet of color that the Lord provides in the wide variety of trees in our yard and down the street. The spring blooms excite me with joy like a child seeing a Christmas tree.

When it comes to fall colors, I am just as excited about the forthcoming color bonanza that highlights our street; however, my beloved husband will usually respond with “Ugh!”  Rest assured, he is not anti-color and he is not diminishing the glory of God’s creation.

Indeed, he loves the color in the trees, if only the leaves would stay on the trees! What he [fore]sees is the pile of dried leaves that translates into work when he has to rake or somehow remove them from the yard so the grass beneath the pile does not die through the winter.

You see, it is all our perspective. Often we speak with people and the response we get is not what we expect. We say something that is fairly mild and, to our surprise, we get an animated fervent response opposing our comment. We may be inclined to respond with equal fervor, but before we do, we should stop and think of the perspective of the other person. There may be something of which we are totally unaware and which, if it had been known, would explain the reaction.  For example, another approach to the fall leaves on the ground would be the fun that a child has in being buried under the leaves!

People much more trained than I will have to answer how to change the perspective of another, or even if that is possible; but I can say that Scripture tells us about how we should respond in that situation.

“A soft answer turns away wrath, but a harsh word stirs up anger. The tongue of the wise commends knowledge, but the mouths of fools pour out folly.” Proverbs 15:1-2

“A fool gives full vent to his spirit, but a wise man quietly holds it back.”

“Do nothing from selfish ambition or conceit, but in humility count others more significant than yourselves.” Philippians 2:3.

And James, the half-brother of our Lord, said:

“Know this, my beloved brothers: let every person be quick to hear, slow to speak, slow to anger; for the anger of man does not produce the righteousness of God.” James 1:19-20.

When my husband responds “Ugh” to my glee at the colorful leaves, I need to remember the difference in perspective. I remind him of the glory of God’s creation and, while I physically can’t do much in the yard, at least I offer to help him.

When it is clear that differing perspectives are at issue, how can you defuse the situation and respond with a soft answer, thinking about the perspective of both you and your fellow Christian? Pray for guidance, and He will give you wisdom.

Praise Him for the difference in perspective. Sometimes, a different perspective enables us to see more of the whole picture!

We happened to be in England when rapeseed was in full bloom. As we left the airport we were told to watch for the “yellow fields” because they were so pretty. We saw the yellow plants as we sped (literally) down the motorway.

Pretty? Sure, but not necessarily spectacular as we were led to expect.

But then – Oh, but then, we went up a hill and saw the countryside splayed below us, and the “yellow fields” were gorgeous! Only by looking at the overall broad picture could we appreciate the beauty of these fields in full bloom. The patchwork of yellow blossoms, trees bordering the various parcels of land, fields plowed with crops just starting to grow, and homesteads with trees providing shade all melded together to form a mural that made a lasting impression on my mind and heart.

As we were looking at this vista, I could not help but think of the perspective that we usually have. We get lost in the detail of every-day life – bills to pay, work deadlines to meet, housecleaning, laundry, children’s activities to watch, etc. 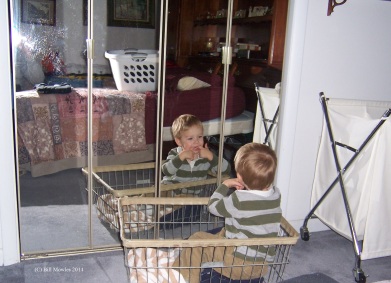 To quote an old adage, sometimes “we can’t see the forest because of the trees!”

We live moment-to-moment because we were created, in time ‐‐ without the ability to transcend that which is immediately upon us. God, however, has a far different perspective.

The Preacher in Ecclesiastes 7:14 says:

“In the day of prosperity be joyful, and in the day of adversity consider: God has made the one as well as the other, so that man may not find out anything that will be after him.”

As the creator of time, God is not controlled by it. He sees the end from the beginning, and He sees all that is in between with perfect clarity. While we do not know the future, we can rest in the confidence that He does! In Psalm 139:16 we read:

“Your eyes saw my unformed substance; in your book were written, every one of them, the days that were formed for me, when as yet there was none of them.”

God had our days numbered and the events in them mapped out for our growth in faith and trust in His unfailing love – for the fulfillment of His purposes and for His glory – even before we were born!

We cannot live above the daily grind. As long as we are capable of movement and activity, we will be cleaning homes, watching after the children, doing the laundry, working at our jobs, cooking meals (and even yummy desserts), etc.

We can, however, live above the circumstances by knowing that God is in control and that He knows what we need for our own spiritual benefit. God sees the pattern of our life and how it interacts with the lives of thousands of others – a pattern that we cannot see because we don’t have His perspective.

Next time you are down because of the demands of all the activities pressing upon you, change your perspective.

Stop and visualize the yellow fields from above.

Or picture your town sparkling in the evening light as you stand on a mountain top.

Or visualize standing on a sand dune, gazing out over the vast ocean.

Or visualize the power and majesty of our Creator God, at least as we can see and understand it in our finite minds.

May I always take time to praise our Sovereign God for His provision of a perspective that is slightly altered from what I can usually see, a perspective that enables me to remember that the big picture belongs to Him.  May my perspective be changed from the micro of every day to the macro of His divine majesty.

He is the Divine Artist Who creates the pattern of each of our lives, all for His glory and honor.  Praise His holy name for His promises and perspective!