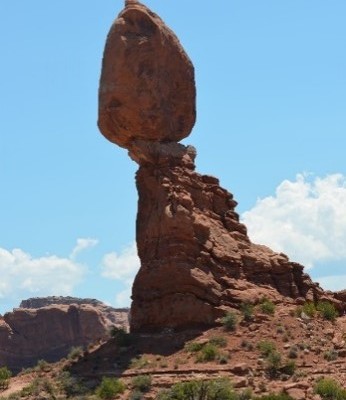 When we were out west, we saw several rocks that were named “Balanced Rock”.

There is Balanced Rock in the Garden of the Gods, Denver, Colorado.

There is Balanced Rock in Estes Park, Colorado, a very different rock than in the Garden of the Gods.

Then there is Balanced Rock in Arches National Park, outside of Moab, Utah.

This is a close-up of the rock holding Balanced Rock up … fairly tenuous except for the fact that it is all rock!

While not exactly a balanced rock, I found this rock formation interesting – a boot or shoe perhaps for a giant!  This also was in Canyonlands National Park, also outside Moab, Utah.

Then there is the Balanced Rock in the Colorado National Monument.

There are a myriad of incredible rock formations around the Balanced Rock in the National Monument.

In Southern Idaho there is Balanced Rock which is stunning as it sits atop a ledge, looking somewhat like a question mark in the sky!

Each one of these “rocks” was named Balanced Rock.  And, indeed, they were perched up on top of other rocks as if they were balanced.  Of course, we know that time, water, erosion have all played a part in sculpting the rocks so that it appears they are balanced on top of the pile.  And it may well be that, in a few centuries, these rocks will tumble down into a pile of rubble.  Then, there will be some other rock that will be “balanced,” I suspect.

As we begin the year 2021, I thought we should consider balance and its source.

We can undertake numerous activities in 2021 and still not be balanced.  We can do all sorts of wondrous things, see all sorts of sights, and encounter many people who will enrich our lives with their presence, their stories and their witness.  But will we be balanced?

What gives us our balance?

I suggest that it is not the pile of rocks on which we rely – fame, riches, family, even church activities.  I suggest that we achieve balance in the way that David said:

Oh come, let us sing to the LORD; let us make a joyful noise to the rock of our salvation!

As Moses was approaching his death and as he commissioned Joshua to take his place as leader of the Israelite people, he said this about God:

“Give ear, O heavens, and I will speak, and let the earth hear the words of my mouth.   May my teaching drop as the rain, my speech distill as the dew, like gentle rain upon the tender grass, and like showers upon the herb.  For I will proclaim the name of the LORD; ascribe greatness to our God!  The Rock, his work is perfect, for all his ways are justice. A God of faithfulness and without iniquity, just and upright is he.”

In 2 Samuel, David utters his last words to the people he ruled for so long:

Now these are the last words of David: The oracle of David, the son of Jesse, the oracle of the man who was raised on high, the anointed of the God of Jacob, the sweet psalmist of Israel:  “The Spirit of the LORD speaks by me; his word is on my tongue.  The God of Israel has spoken; the Rock of Israel has said to me: When one rules justly over men, ruling in the fear of God,  he dawns on them like the morning light, like the sun shining forth on a cloudless morning, like rain that makes grass to sprout from the earth.

Isaiah provides a warning to us – the Israelites had forgotten God and there would be resulting hardship and punishment:

For you have forgotten the God of your salvation and have not remembered the Rock of your refuge; therefore, though you plant pleasant plants and sow the vine-branch of a stranger, though you make them grow on the day that you plant them, and make them blossom in the morning that you sow, yet the harvest will flee away in a day of grief and incurable pain.

Jesus used the rock as illustration in one of His parables:

“Everyone then who hears these words of mine and does them will be like a wise man who built his house on the rock.  And the rain fell, and the floods came, and the winds blew and beat on that house, but it did not fall, because it had been founded on the rock.”

Beloved, Jesus is the Rock of our salvation.  It is He who lived a sinless life but died on the cross for our sins.  It is He who suffered the penalty that was due for us to endure.  It is He who was resurrected from the dead after three days, and it is He who lives today in Heaven where He intercedes on behalf of His people, those who believe in Him through faith.

But the LORD has become my stronghold, and my God the rock of my refuge.

I pray that you would make it your prayer for 2021 that you would lodge in the stronghold of the Lord.  That God would be the rock in which you take refuge.

Don’t become unbalanced.  Read the Bible, study the Word of God.  Pray to the Lord and give Him your allegiance.

Father, I thank You for sending Your Son to be our Savior and Redeemer.  I praise Your Name for quickening my heart and for placing me in the Rock so that I have no fear with You as my stronghold.