I do pray that you have/had a Merry Christmas.   A Christmas that was marked with love and kindness extended to you and to those you encountered during your day.  A Christmas that, at least in some small measure, focused on the Christ Child who entered this world as a Baby so that He could save us from our sins. 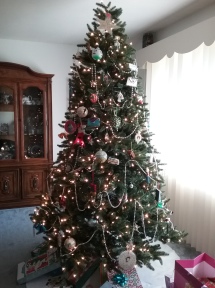 Every year we decorate the tree with various ornaments and lights, complete with gaudy garland and the toilet paper Santa that the children made when they were in nursery school.  (The Santa has lost one of his legs through the 40 years it has survived, but all in all, he sits on one of the tree branches and smiles at the adult children who made him so long ago.)  Then too there is the construction paper star and the clothes pin angel that the children made in Sunday School.  The star has had to be laminated but the angel is still free to clip onto the branch high on the tree.  (Each year it is a sibling fight to see whose ornament is the highest on the tree!  This year I believe the star won the honor.) 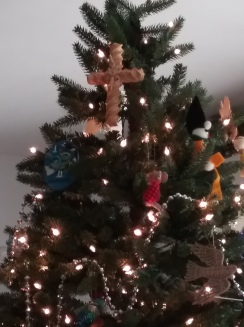 But, high on the tree, there is a cross made of hay.

It is a somber ornament – one that does not speak of the manger or the cattle, of Mary or Joseph, of the angels singing or the shepherds marveling.  It is a symbol of the crucifixion that would take place 33 years later.

But, it is a solemn reminder that Christmas is not the “end game” for the Christ Child.  Rather, His becoming the Babe in the manger was a necessary occurrence so that He could live and become the Savior and  Redeemer for His children.

The Christmas carol “Silent Night, Holy Night“ was composed in 1818 by Franz Xaver Gruber to words written by Joseph Mohr in the village of Oberndorf bei Salzburg, Austria.

The third stanza of the carol sums up this aspect of our Lord’s birth:

Paul says it another way in Galatians 4:4-5:

But when the fullness of time had come, God sent forth his Son, born of woman, born under the law, to redeem those who were under the law, so that we might receive adoption as sons.

Celebrate Christmas with the realization that without the Babe in the manger, we would not have the Christ on the cross, and we would be left in our sins and trespasses, the burden of our iniquity too much for us to bear.

Praise the Lord for His coming as a child – Praise Him too for being our Savior and Lord.

Merry Christmas to you all from all of us at The Ruminant Scribe.

Follow The Ruminant Scribe – Snapshots of God's World and Word on WordPress.com