“You are the light of the world. A city set on a hill cannot be hidden. Nor do people light a lamp and put it under a basket, but on a stand, and it gives light to all in the house.  In the same way, let your light shine before others, so that they may see your good works and give glory to your Father who is in heaven.”

1,  On November 3, 1871, the Yaquina Bay Lighthouse in Oregon was lit and its beam was first broadcast over the ocean.  The light was a single wick lantern which burned refined lard oil and its light was a steady white beam that was 161 feet above sea level.

A plaque at this display, shown in the picture, gives more information about this lighthouse lamp. 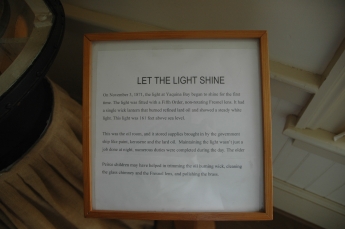 2.  Years ago, we were driving in Florida from Orlando to Cape Canaveral.   At that time, there were still undeveloped areas along the highway.  There was a bit of cloud cover so not many stars were shining through.

As a passenger, just sat gazing out over the seemingly empty space when I thought I saw a light.  I turned my head, but there was nothing there.  I looked out the right-hand window when my peripheral vision detected a light to the left.  Turning my head, again there was nothing visible.

My husband asked what was wrong since I was turning my head back and forth, and I said that I thought I saw a light, but there was nothing there.  I really thought I was going batty or, more likely, that my vision was on the blink!

Just then, the light beamed again and both of us saw it and laughed as we realized it was a strobe light for aircraft guidance.

Do you see the difference?  Strobe lights are not like the lighthouse that shines its light throughout the night sky.  Strobe lights can best be described as “Now you see it, now you don’t.”

Jesus said that we are to be lights in the world.  But that light should not be “on again/ off again”..  Strobe lights are like that.  We are like that too.  Jesus addressed this type of person when He used an agricultural example and said:

“For no good tree bears bad fruit, nor again does a bad tree bear good fruit, for each tree is known by its own fruit. For figs are not gathered from thorn bushes, nor are grapes picked from a bramble bush. The good person out of the good treasure of his heart produces good, and the evil person out of his evil treasure produces evil, for out of the abundance of the heart his mouth speaks.”

Our actions don’t always match up with the words that we speak.

When we witness to the hairdresser and talk about all that we are doing for Jesus in the church and in the community, and then we criticize and condemn her for how she did our hair, the strobe light is dimmed.

When we put the decal on our car indicating that we love Jesus, the witness light is bright.  But the strobe is darkened when that same car cuts off others on the highway or when expletives are heard because of a slow start at the light.

Let us not be strobe light Christians.  Let us not dim the light with our pride, arrogance or lack of love.  As noted at the Yaquina Bay lighthouse (and with just a bit of editorial license), “Let YOUR Light Shine” for the Lord Jesus Christ.

Father, I pray that I would not tarnish my own witness for You by inconsiderate actions, unkind words, or unloving attitudes.  I pray that You would forgive me, Lord, when I have put my own desires ahead of others, my own wants ahead of others’ needs, my own interests before Yours.

One thought on “WHAT LIGHT? DID YOU SEE A LIGHT?”

Follow The Ruminant Scribe – Snapshots of God's World and Word on WordPress.com