When we visited England, one of the places we enjoyed seeing is the Uffington White Horse, a highly stylized prehistoric white chalk hill figure, measuring 360 feet long.  It has been said that the White Horse has been guarded as “a masterpiece of minimalist art” for over 3,000 years, as it dates from the late Bronze Age, sometime between 1380 and 550 BCE.

This is a closer picture of the white horse figure.

When standing on top of the mountain, this is what part of the figure looks like.

Nearby are ice-cut terraces known as the “Giant’s Stair”.  Speculation is that these terraces at the bottom of this valley are the result of medieval farming.  The valley below the horse is known as the Manger and legend says that the horse grazes there at night. 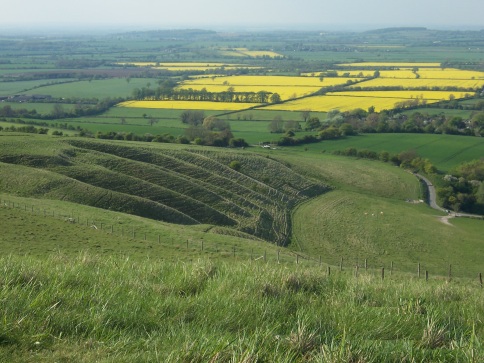 (The pictures were taken by us on our visit to England.  Much more information about the White Horse was accessed 10/17/17 and can be found at https://en.wikipedia.org/wiki/Uffington_White_Horse .)

Numerous legends surround the White Horse and adjacent fields, and that prompted thoughts about legend viz-a-viz fact.  A legend can be generally defined as a story that has come down from the past, especially a story that is regarded as historical although not verifiable.

While there are legends in every culture, there is one story that is worldwide and which is most assuredly fact rather than legend – the story of God’s involvement with people on this earth as found in the text of the Holy Bible.  Indeed, neither the Old or New Testaments are either fiction or legend, rather they are the words of God as they were recorded by real people and as they have been preserved through the millennium by God’s hand.  Indeed, the Biblical text is self-authenticating; for example, the Old Testament is the record of God’s calling His people and of their history, prophets, priests and kings.  The New Testament contains the witness of that which the writers personally saw and heard.  It is a record of eyewitnesses testifying to the truth of their writing.

In fact, Jesus understood that the Ten Commandments were not legend or irrelevant fiction.  He taught about them and even broadened their application.  For example, consider what Jesus said about the Sixth Commandment as found in Exodus 20:13, His words recorded in Matthew 5:21-22:

The Seventh Commandment as found in Exodus 20:14 was also referenced by Jesus in Matthew 5:27-28:

“You have heard that it was said, ‘You shall not commit adultery.’  But I say to you that everyone who looks at a woman with lustful intent has already committed adultery with her in his heart.”

Legends are fun to hear and the stories are entertaining to read.  But Scripture is not legend or fiction: it is a serious book to be read and studied.  The Holy Bible contains the very words of the Holy God, and they are as true today as when they were written and spoken thousands of years ago.

The real question, then, is what will you do with the Holy Bible?

If the Holy God has given us His Word as a guide for living our lives, don’t you think we should read it?

“Remember, it is sin to know what you ought to do and then not do it.”

And if we read it, should we not take its words into our minds and hearts, thereby allowing God’s Spirit to conform us to the image of Jesus Christ, our Savior and Lord?

Father, let the words of my mouth and the meditation of my heart be acceptable in your sight, O Lord, my rock and my Redeemer.  Psalm 19:14  May I love and read Your, and I ask that Your Holy Spirit would quicken my heart and let those words take root so that my actions conform with Your instructions.

Join 345 other followers
Follow The Ruminant Scribe – Snapshots of God's World and Word on WordPress.com